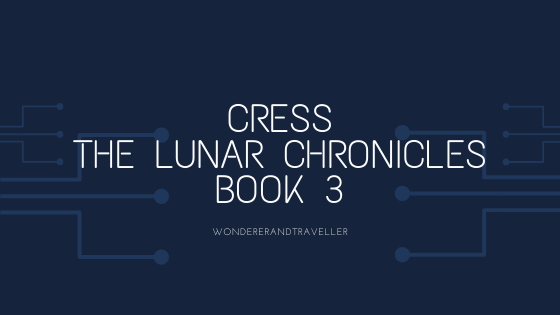 We are up to book number 3! *Spoilers ahead*.

“HER SATELLITE MADE ONE FULL ORBIT AROUND PLANET EARTH

every sixteen hours. It was a prison that came with an endlessly breathtaking view— vast blue oceans and swirling clouds and sunrises that set half the world on fire.”

Yet another amazing book from Marissa Meyer in The Lunar Chronicles!

When we meet Cress she is millions of miles away from all civilization trapped and under control of Sybil and the Luna Queen Levana. Little do we know, she is a huge fangirl of Thorne and Cinder. With her multitude of netscreens she’s a pro at hacking and searching and especially stalking Carswell.

This book was really enjoyable as again this time we learn about Cress and how her life and Carswell Thorne collide, even though its safe to say she knows more than enough about Mr Thorne!

Cress cuts of her hair so soon on which took me by surprise although it made sense by what came next. Naturally in the Rapunzel story her prince is brought back to life by her teardrop in his eye. The take in this story was carswell hitting his head so badly his injury makes him blind, so cress has to tend to him with eye drops from Dr Erland so his sight comes back. Although it makes her afraid as she has spent so long with Carswell with no sight that he wont like her once he can see.

Although I felt during their trek through the desert went on for slightly longer than it should of done, I wanted nothing more than for the two of them to get together! So when they were pretending to be husband and wife I shipped it so hard.

What really threw me was the twist from Dr Erland and Cress. When he thought is daughter was dead, killed by Levana because she was a shell, when all along she had just been up in that satellite, working for her! And then at the end of the book, just like that, he died for them. He didn’t even get to share any time with his daughter and man, I cried. I was devastated. HEART SNAPPED IN 2 confidently.

I was very excited when hearing about Scarlet and how she was doing on Luna, especially because now I have started book 4 the small encounters we did face with Scarlet and her entrapment make going into the final book so much clearer. It also gave me relief knowing she was surprisingly okay, but absolute torture knowing wolf has no idea how she is doing or whether she is alive.

When they were all re-united in Africa I was so excited for their plan to come together, to ruin the wedding and retrieve Kai (kidnap really). So when it worked, I was even more ecstatic because the whole process had me tense, I was adamant something had to go wrong. BUT NO.

Each character contributed to the challenge in their own way, it was so well executed and so well written best believe when my dad called me to say dinner was ready I did not want to put my book down.

I also love how excited Iko is to get a human body! She had basically been dreaming about it from book 1.

AND I WILL CONTINUE TO SHIP KAI AND CINDER FOR THE REST OF MY LIFE. K, thanks, bye.

I have already started book number 4, Winter! I HAVE TO KNOW HOW IT ALL ENDS.

The series is over after this book! So any further/other book suggestions would be really greatly appreciated!