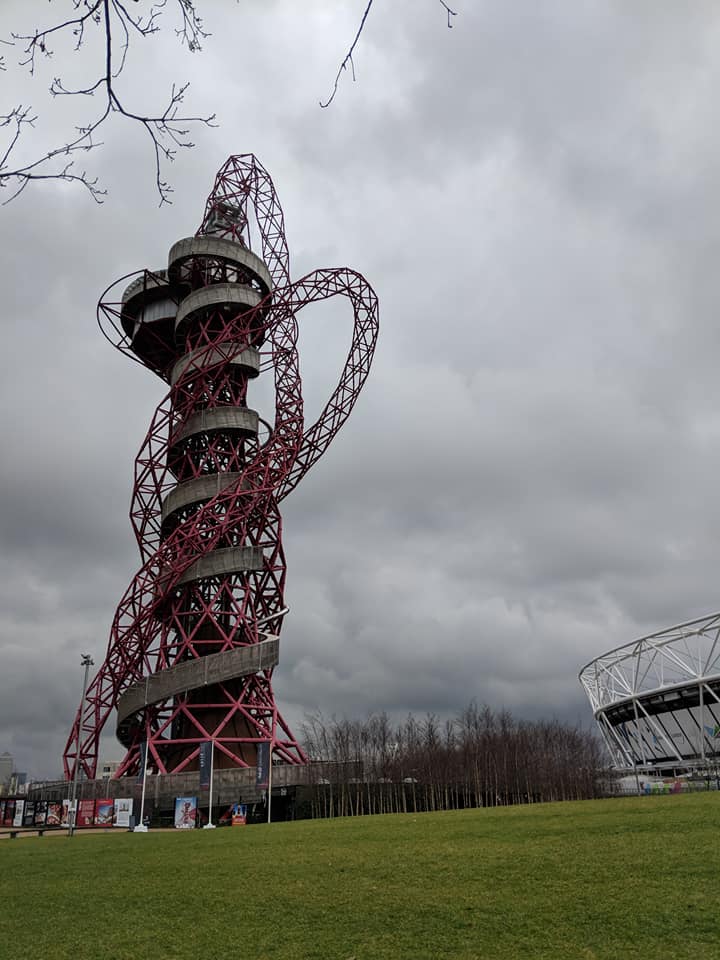 My Birthday was hands down one of the best days out In London I have had to date, All thanks to the man himself Brad who planned it all!

He went through my bucket list and chose a route that made sense to cover as much as we possibly could in 1 days! It was amazing, I couldn’t have asked for a better 21st!

This is going to be one long blog post about the day so I hope you’re ready and enjoy!

The first place we headed was the Olympic Park! I’d NEVER been to the Olympic Park until then and it goes to show how much money they spent on their Olympic Village, it was immaculate and evident it was made for many people at a time. Its absolutely HUGE and very impressive to look at.

Our main reason for our visit to the Olympic Park was because we were going to do the SLIDE! The ArcelorMittal Slide in the heart of the Olympic Park. You can’t miss it.

Naturally we arrived and dropped our bags in the lockers before getting the lift up to the top floor where we could access the slide.

When we reached the top we were given proper cosy hat as headgear so we wouldn’t hit our heads as you go a lot faster than you think. (Of course its proper safety headgear which they struggled to find big enough for Brads head). 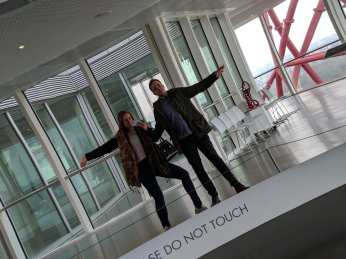 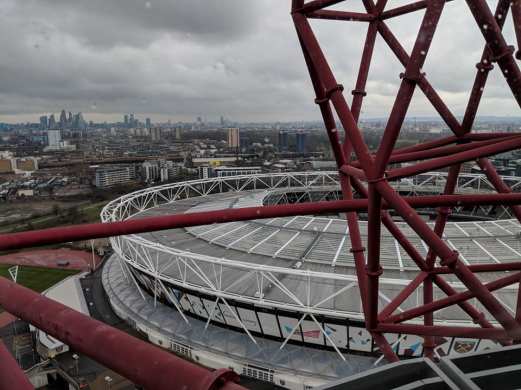 We were also given arm pads to prevent any burns on our arms from the slide and once we jumped on the slide we were given something that looked like a black sack.

You popped your feet into the bottom and then held onto the handle and laid down on your back and they held you till the light turns green.

Its incredible because its one big spiral and you go A LOT faster than you’d think, I got to the bottom in like 42 seconds, although according the guys who were working there that was SLOW, GOD knows how!!

I still felt like I was going so much faster than I was! The top of the slide is glass in certain areas so you can also see the view from the slide as you make your way down!

Once we got to the bottom we got the lift to the level below the slide, here we could see the view of the entire city, anyone would argue that it was better than what you can see from the London Eye as this was the Horizon of the entire city, it was just as gorgeous as the view from Primrose Hill!

The best part was you could stand on a platform which put you above the slide, and when you look through the hole on the floor you’re directly above the spiral of the slide, its really something!

So after all the slide excitement we headed straight into the centre and emerged at St Paul’s Cathedral.

Id always wanted to go because its such a beautiful piece of architecture. Typically The weather wasn’t too great, Nice and Grey, nothing new for the UK. So we wandered around the entirety of the building, its just huge!

It was build in 1675 and Its a listed building so shall not be moved or demolished either, so its a beautiful piece of heritage for London, and Very photographic too which is nice considering it was originally destroyed by the fire of London and then rejuvenated. 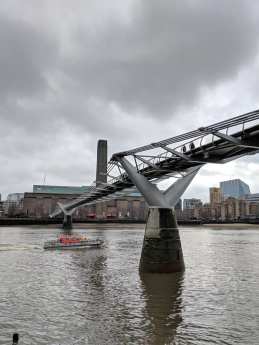 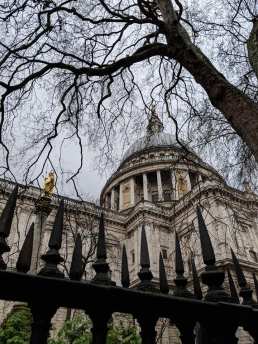 Literally directly behind (or in front depending on how you look at it) of St Paul’s Is the Millennium Bridge!

Now I know the Millennium bridge from Harry Potter, that’s where a lot of other people do too, so we walked past it we didn’t walk over it, that was for another day I’ll be writing about with my cousin and her girlfriend very soon!

Another pretty architecturally satisfying bridge in the city! 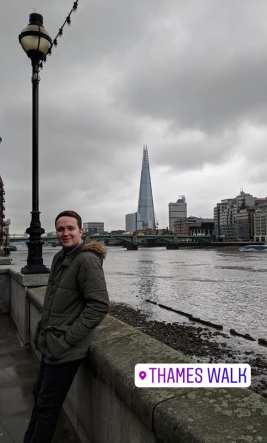 From the Millennium bridge there’s a Thames walk from there where you can walk all the way along the Thames river and enjoy the scenery! It was a really nice walk to do but its a shame the weather was so rubbish!

Now I’ve never seen let alone been near the Tower of London, I didn’t even realise that it was right on the Thames. I know that the area is obviously super popular and lovely, I remember when it even had the roses as the artist display across the Tower Walls but I was gutted because I never actually got to see it.

I almost felt like I was finally EMBRACING London, are you even a Londoner if you haven’t walked over London Bridge? I’ve looked at it from The Shard but never actually walked across it, so it was nice to finally do it.

There is actually a cafe underneath/part of the bridge and I really really wish we had gone in it as it looks like a typical Pub/Cafe inside and I can always do with a beer. 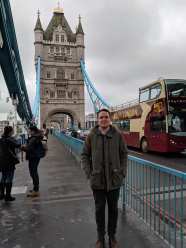 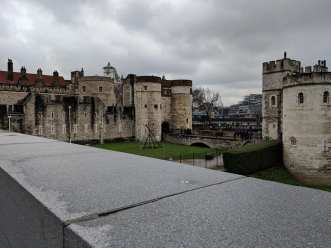 Now we were the OTHER side of the Thames and walking back alongside the river! Once again we were off and were heading towards HMS Belfast.

HMS Belfast is a ship made for the Royal Navy! I really really wish I had spent £17 just to go on the ship, its definitely one to go back and do! Would I ever have the opportunity to go on a royal Navy ship any other time? Probably almost definitely not, So that is another thing I will be definitely coming back for.

I have a two week period at the end of my placement where I will have nothing to do! I Finish in Wembley on the 3rd of July and Brad has a handover period for his placement so those are two weeks I can really have a proper In Depth exploration/Adventure!!

Once we had a nose a HMS Belfast expressing how cool it looked, we headed to Hays Galleria. Hays Galleria is the most impressive and gorgeous place I’ve been in London, just small shops like Accessorise and Costa under this beautiful glass canopy roof.

It looks so regal and expensive when really it really isn’t! There’s a very interesting statue in the middle of the Galleria, Its a boat where the bow is a huge Nose and the driver of the boat, his face is majority Nose. Its also another listed building of London but this one is Grade 2, it was refurbished to look as good as it does now in the 1960’s.

You can throw money into the mouth underneath where they are collecting for charity, so do your part if you can!

After that super long walk, we were a little pooped and warn out, so we headed to our next part of the day, Bradders had booked THE LONDON EYE!!!

21 years of age and that was the first time I had EVER been on the London Eye, I was disappointed it had taken us THAT long (March) since we arrived! (July!).

The view from the London Eye is spectacular, we used a taste card to get BOGOF Offer as well so we paid £27 for the two of us. It was really lovely, we had a picture together done by the guys who work there which was nice but that certainly wasn’t worth the money so we didn’t purchase it, we got our own pictures doing exactly the same thing ourselves!

It was just so lovely to overlook a city in which I love so much and see it in all of its glory. We jumped into our pod with 8 other people and it takes about half an hour to 45 minutes to do a full circle, but time really flies. 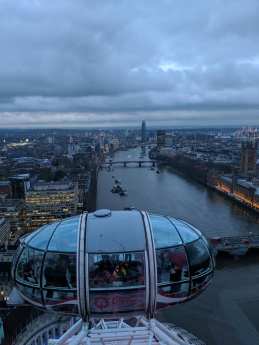 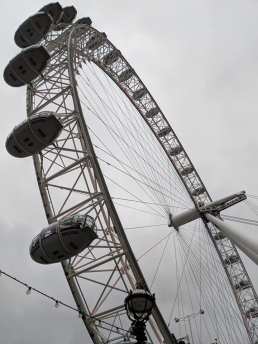 In the pod you can also go to different points and use the Samsung iPad’s dotted around facing in the direction of what you can see in front of you from the window! So if you’re not sure what a building is then you can enquire on the iPad and it gives you all the correct information on that building, its pretty cool.

Once we clambered off the London Eye, we had some free time before out table booking in Soho! We went to McDonald’s next too the London Eye to use the toilet and ended up discovering an ARCADE!

I’ve always lived by the seaside so I am a BOSS at arcade games, so we spent at least an hour there playing games against each other (I won most times don’t let Brad tell you otherwise). 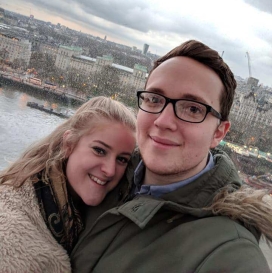 After we were doing pretending to be children again we hopped on the tube over to Soho where we were about to encounter the meatiest meal I have EVER had. Brad had visited this restaurant before and because he had hyped it up so much I was adamant to go there, it is a place called Bodeans BBQ!

It doesn’t look like much from the outside but once you’re in there, my god. We paid £50 for a BOSS HOG PLATTER for 2! It consisted of SO much meat, two different types of BBQ chicken, pulled pork, burnt ends, brisket, two types of BBQ ribs and even baked beans that have MEAT in them!

It was such a lovely meal and well worth the money, the food came really quick too and our servers were the fiercest guys I have ever met. We even got a complimentary brownie with a candle in it because it was my 21st.

All in all it was a really wonderful day and I absolutely could not have enjoyed myself more, the boy did good, I couldn’t have asked for anyone better to spend it with either.

The drinking part on another hand?