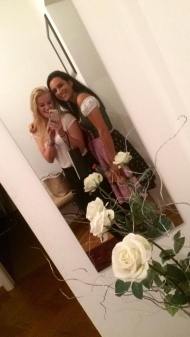 When we got to Vienna of course we knew that there was going to be lots of clubbing involved and alcohol to be consumed within the next week. It was inevitable as raging student alcoholics.

On our first night when we arrived in the airport we were already late for our first party, Julia and her friend both showed up at the airport in Traditional Austrian clothing and they looked so incredible I wanted a dress myself!

Unfortunately we missed the Traditional Austrian Party but we ended up heading on out anywhere to a club that where we got in for free! The music was good and unfortunately I don’t remember what the places was called but for our first night it was definitely a good one. We landed in Vienna at 9pm and were out until the early AM! The perfect way to start a holiday, we also met some of Julia’s amazing friends, it was a lovely night! We ended up getting the night bus home and that was different, I’m pretty sure we were out until 5am getting the right buses home! 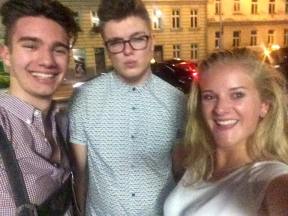 One night Julia was working so her friends took us to a bar in Vienna called Kaktus, It was a cool looking places with different coloured lights and high chairs and tables. We had a few cocktails and drinks but it was a relatively quiet night out and we were home by 12! Which felt so nice because I was excited for a full nights sleep!

Julia and her friends took us out one night to a club called U4. It was somewhere in the depths of Vienna and was underground, It had two rooms, one being a cheesy hits floor and the other being a hip hop dance floor. It was a pretty cool place, the shape of the bars were so different and the drinks were fairly expensive! It was cool because again you could smoke in the clubs! I didn’t smoke at the time so I didn’t really appreciate it then but when I go back I know I will!

The funniest night was easily the night we only made it to pre drinks because jake was sick everywhere, I’ll never forget that, Shout out to you Jake, I hope you remember exactly what happened that night! 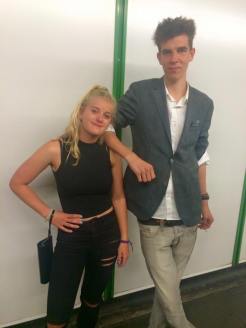 We headed out another night into Vienna where we ended up at this really huge nightclub, I was never told the name but it was honestly massive and had a huge area outside with a money grab machine and photographs. The drinks were a relatively good price, it was picture perfect and so cool for a club, We danced the night away and had a real laugh. I got given a sticker on my purse, but Ill leave you to wonder what It means! This night I realised that I was short and that Julia’s friends are SO much fun! We didn’t stay out too late this evening but it was such a picture perfect place for a club! 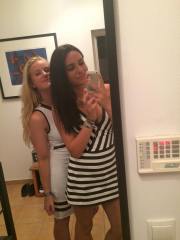 The pre party was all fun and games at one of Julia’s friends house, it was sad to have photos as we knew we weren’t all going to see each other for a really long time. But the session was great and drinks were flowing and it was such a nice time It made me realise Julia introduced me to easily the best people ever, everyone was so nice and welcoming, I hope to see them all again soon when I head back to Vienna soon. 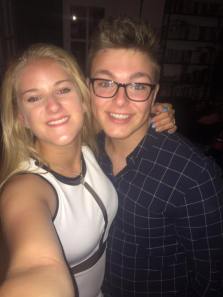 So we headed out to Passage and it really was the funkiest place, Passage is basically an underground walkway converted into a massive underground club with ceiling tiles that change colour, a huge DJ Booth the my friend ended up falling into after leaning on the door when it was slightly open, and a large bar and seating areas all around the edge of the club. It was a mint place, they also sold these huge drinks called Zombies, they had every alcohol under the sun in by the taste of them, they were very strong and although I never bought one for myself I somehow ended up being next level ruined.

It was easily the best night out we had, the music and the atmosphere was great. When the night ended Julia nearly got into a taxi without Jake and I, could you imagine, us lost in Vienna!  Would be absolute carnage! We didn’t get home until early morning, early enough that we got to see the sunrise as we arrived back at Julia’s.

The next day was our flight, and I was written off. I couldn’t remove my head from a toilet bowl for a good 4 hours, let alone get on a flight. But alas I struggled through, I just needed a tea on the plane and I would be happy. Which was something I didn’t get, So I wasn’t happy.