When we first got to Dublin we headed to our hostel, then straight out, Only to find

ourselves in the same pub the entire afternoon. It was called Murphy’s Pub and we sat in there for hours upon hours just relaxing with each other, we got there at about 11am and stayed until around 3pm. It was a long time but we were all to busy falling asleep as our flight was at 4am the same day, listening to men chanting at football and ripping each other to bits like we usually do.

It was a nice place, we sat outside on the balcony, drinks of course were not cheap because its Dublin. We had a whale of a time even though we were all beyond tired. Josh ended up sticking rizla’s to his eyebrows and Cam drank my stale pint of guinness i’d left on the table for a good 2 hours which also had someones chewing gum in it, and the man still drank it. I love my friends.

Our first big night out was in Xico. Its an over 21’s nightclub in Dublin where you have to pay €20 just to get in. But because my wonderful irish friend Craig has some very very popular friends (Jay Duffy, Keith Duffy from boy zone’s son), We all managed to get in for free and under the age limit, I’m not even 21 till next year either! All about who you know aye! It was a huge nightclub with a smoking area upstairs, huge long bar (with attractive barmaids) and a mixture of cheesy but also good music to dance too! 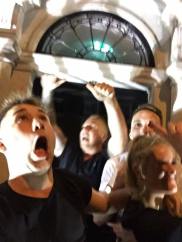 It was an amazing night, the drinks were flowing and like I said before were not cheap! At about 2am there were only me, Brad, Cam and Josh left in Xico, We partied the night away and danced to the cheesy music until 3am and the lights came up. It was a fun night and we were all hammered. The Downside to this is that we had gotten a taxi to Xico and had absolutely no idea where we were in relation to our hostel, and we were all absolutely mortal.

This resulted in the 4 of us attempting to walk through the streets of Dublin trying to get home, smashed. After having a

number of photos in a door way that looked like No.10 Downing street, we headed further down a road where Josh decided to climb up onto the highest wall we could see whilst the rest of us looked at the city map, and we still had no idea where we were. And then to top it all off whilst I was trying to read the map Josh and Cam were walking circles around me and the map sign, this only resulted in Cam somehow managing to wallop himself in the face with the sign. This only progressed into Cam laying on the floor and also having a cone on his head at

Even though it was brilliant, It was nearly 4am and I was tired and just wanted to go home. So the 4 of us managed to somehow climb into the back of a 3 seated rickshaw. God do I feel sorry for the bloke who had to bike us back to our hostel because the journey wasn’t short. We were cheering him on as we all sat in the back. We ended up paying him €13 euros and a tattoo voucher for somewhere back in the UK as that was all we had left, whereas it should’ve been at least €25!! it was a crazy night and I know I’ll never forget it.

One evening Brad and I headed down to Temple Bar. If you ever get the chance to go there then do, when we went down there were pubs galore, live music and lots of pretty lights!

Its a really lively place, and very expensive! My Malibu and coke and brads pint cost €16 in total, just for 2 drinks! Don’t go to temple bar with the hope of getting pissed for cheap because it just won’t happen, so be prepared to spend the dosh!

After Temple Bar we headed to meet everyone at a Shisha bar down the road from our hostel. It was really cool, it was down a set of stairs and through the corridor into these little rooms where you had to take your shoes off and chill out on the floor. Each ‘booth’ was separated with silk curtains and there were pillows and it was really cosy. It wasn’t too expensive and we got a shisha pipe and some jasmine green tea, it was so chilled out and a perfect way to wind down!

We spent our last evening in a pub in Temple Bar and all got monumentally ruined, we listened to live music and patted ben on the back as he chundered by a bin outside, the perfect way to end the holiday!

I adore my friends to say the least! 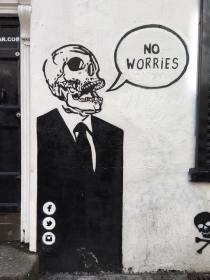